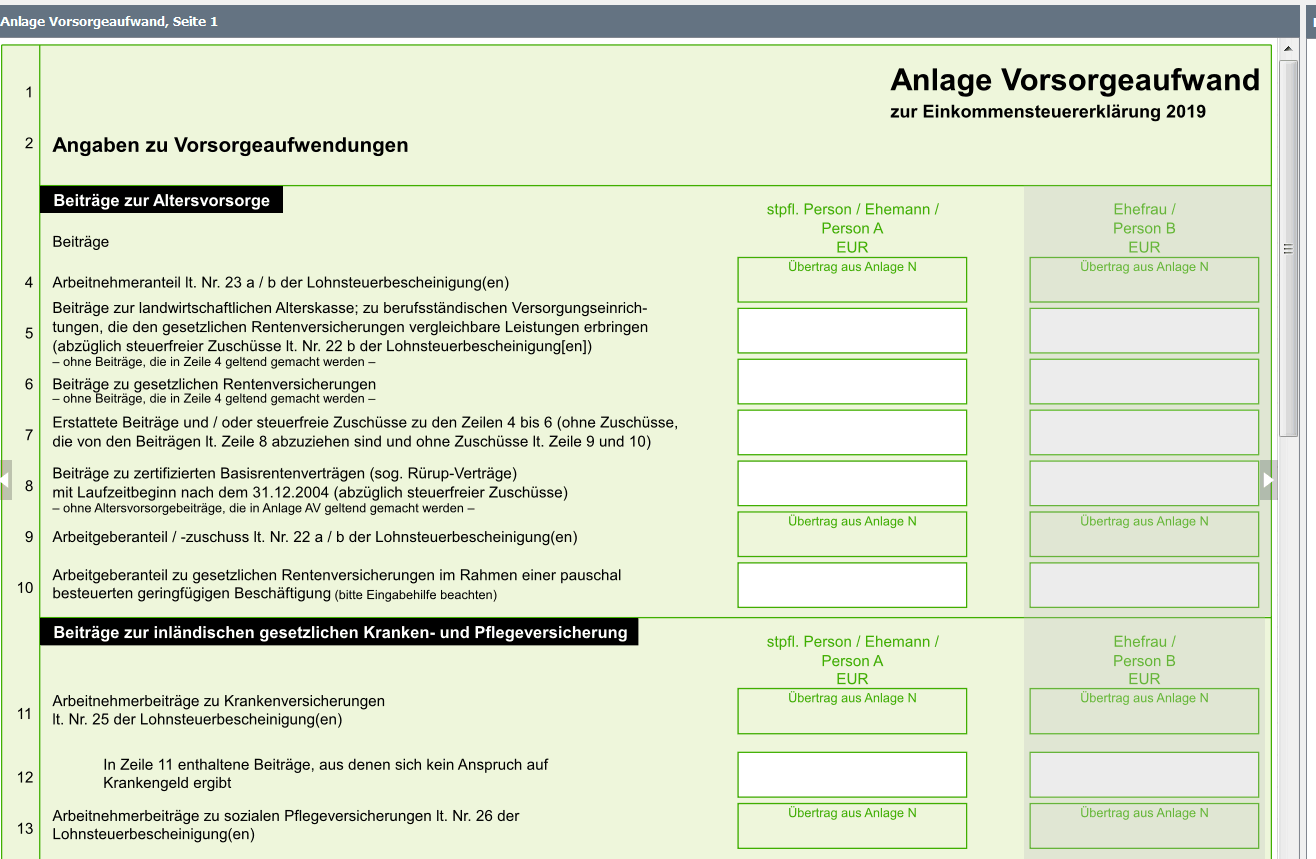 Anlage Vorsorgeaufwand is an application of German income tax declaration, where insurances are indicated.

Let me remind you that I am not a professional tax consultant. Declarations are considered from the point of view of an ordinary user: a family with children and one working person of average income.

At the beginning, the pension insurance from the Lohnsteuerbescheid is indicated. Records from Anlage N in the PC-Elster were transferred here automatically. In the online version, you have to enter it manually.

Note that everything is filled out in euros rounded according to the general rules, without cents.

Line 4 is filled according Lohnsteuerbescheid.

Fill in line 5 if

You fill in line 6 if you

If you have limited income and make voluntary payments, you can enter these amounts on line 6 and the employer’s paushal sum on line 10.

Line 8 for those, who has Rürup-Rente.

Line 9 – from line 22b of the Lohnsteuerbescheid, who has it filled.

The old line 11 with the words yes and no has been moved to the end of the Anlage.

Instead, lines 11 and 13 for health insurance are completed by Lohnsteuerbescheid.

The next block (lines 16-21) is similar to the block of lines 11-15, but for those who pay voluntarily and seniors.

Line 22 – additional health insurance (for example, a separate room in the hospital, service by the chief). The likelihood that something will be deducted is not very high – usually the paushal sum is chosen entirely with standard insurances.

Another similar block. Lines 23-27 are filled in by those who refused to transfer data from the insurance company.

Finally, a block of similar questions (31-36) on health insurance abroad.

Lines 37-39 are filled in by Lohnsteuerbescheid.

Lines 40-44 are insurance for other people, for example, for children who no longer receive Kindergeld. Family insurance does not apply.

Lines 45 and 46 are for job loss insurance, from employer and voluntary.

You indicate the insurance in the amount that was paid in the year for which we submit the declaration. That is, if you paid in 2013 for 2014 and paid extra for 2012, then you indicate both amounts.

How to fill out Werbungskosten Anlage N

Note, that you can indicate many insurances, but there is a limit of deducted sum. And this limit is relative small: up to 1.900 euros for employees and Beamte / up to 2.800 euros for self-employer.

Lines 49 and 50 are old pension insurance with / without capital investment.

Line 51 – former line 11. If your employer pay part of your insurance, then the answer is yes (in the online version you can leave the line empty). The same for most pensioner, for whom the pension fund pays.

And only those who make 100 percent of their payments themselves write the answer no (in the online version they put the number 2). These can be, for example, non-working spouses who voluntarily pay payments to the Krankenkasse.

The following lines (52-56) are for those who did not pay pension contributions (for example, a student or a beamter).

An old question: what to do with dividends from Krankenkasse?

If you did not tell your tax data to Krankenkasse, then you must indicate the dividends yourself. In a letter from the TK it was said – to indicate in lines 22-23 in old Anlage Vorsorgeaufwand. However, Elster highlights this as a mistake.

The following was written on the TK website. If you are an employee (and are insured in state insurance, regardless of whether it is mandatory or voluntary), then write dividends in the line 16. If you are insured so that you are not entitled to sickness benefits (ohne Anspruch auf Krankengeld, and most ordinary workers are entitled to these payments), then add the amount also on line 17.

Pensioners and voluntarily insured (self-employer, for example) enter in line 22 or 22 + 23.

Now, if I understand correctly, these are lines 14 and 19.

Other Anlagen – #steuererklaerung
Other posts about #finance