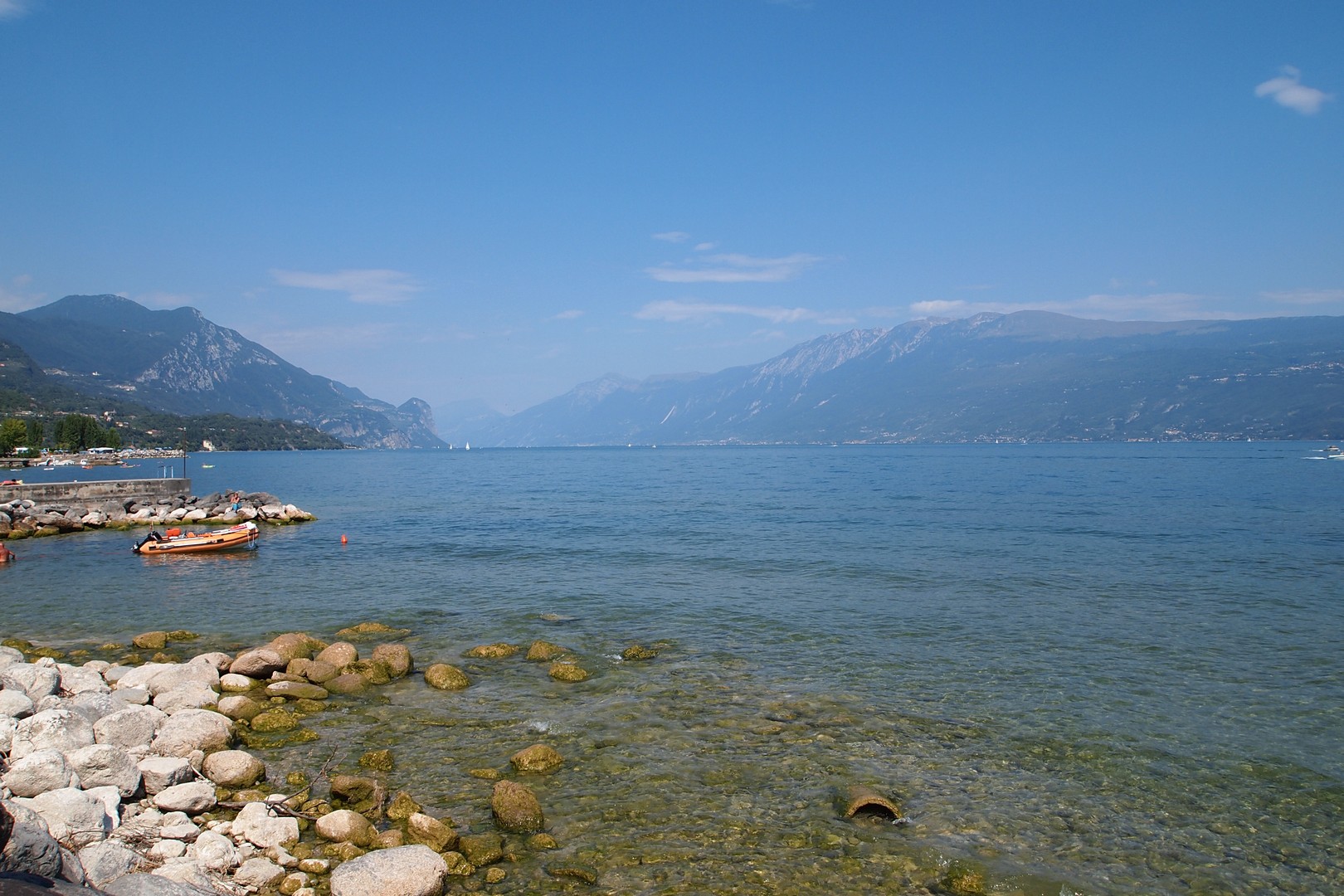 Lake Garda is large. Its northern and southern parts are very different, and getting from one end to the other is not so easy: the roads are slow and crowded. In the north there is more nature and walking, in the south – tourist sights and entertainment.

In this topic, a general orientation: roads, transport and the most famous sights so that you can decide where rent a hotel.

The map is enlarged. This map shows only the entrance routes and the most famous sights. More detailed maps will be in other posts.

How to get to lake Garda

Anyone who tried to get into Italy on Saturday August via the Brenner Autobahn has the “warmest” feelings for the Italian “service”. This narrow road, decorated with rusty bumpers, with no normal places to rest and eat, is simply a symbol of bullying people for their own money.

The reason for traffic jams (slowly stop and go) is in the resort system “from Saturday to Saturday”. 230 km in 6 hours (let’s calculate the average speed on the “Autobahn”), five tow trucks with broken cars seen. And this is not a record yet, as we successfully passed the first traffic jam on Vipiteno. Any exit off the Autobahn causes a global stop.

There are two decent entrances to the lake: to the northern part via the Rovereto exit and to the southern part via the Affi exit. From Affi there is a free expressway to Desenzano and to the city of Garda (purple route on the map). Since it is free, it drives rather than stands. Except – place where it meets the Autobahn exit at Peschiera.

Most of the traffic along the lake goes through cities. Therefore, any circle, traffic light or parked car will slow down. Average speed is between 30 and 40 km per hour. We drove

There are two ferry crossings on the lake: Toscolano – Torri and Malcesine – Limone.

Moving on ships is relatively convenient. On the one hand, it will be faster than some bus or car routes. On the other hand, you still have to sail for a long time and not all boats are comfortable. Ours, for example, swam like a truck through potholes, so almost everyone was seasick in an hour, which we, in general, are not inclined to. The “rocket”-ship reaches the opposite end of the lake in two hours, but you have to sit indoors, as in all rockets.

The bus service is well developed. One BUT: they are also in traffic jams. Various bus routes with timetables are available on several of the lake’s tourist sites (some of the sites are listed below).

Buses along the eastern and western shores of the lake run from Peschiera and Desenzano, respectively. There are railway stations in these two cities.

There is also a mysterious 802 bus that runs from Sirmione to Peschiera, which we have seen several times, but its schedule was not found.

In some blog I read that the shores of Lake Garda are one large beach. This is an (one large) exaggeration.

There are a lot of places that are inaccessible for various reasons:

The water is cleaner and colder to the north. There is no sand anywhere, but small pebbles, large pebbles, cobblestones of varying degrees of enlargement. To feel comfortable, it is better to have swimming slippers. If you go to the store “everything for vacation” somewhere in a not very touristy place, you can buy it for 7-10 euros. In August, in good weather, the lake is better than the sea – the water is warm enough to hang out in it for a long time.

There are so many attractions on the lake and around that a week is not enough to visit everything.

You shouldn’t try to visit every popular town on the lake – they are all about the same: narrow streets, old houses, villas. It is better to look out for a few other attractions, such as special beaches, cable car, garden, special view, and then add towns nearby to them.

I will briefly list the largest sights and cities, and review in more detail in the next posts.

Of the major excursion cities, Verona, Mantua and Brescia are easily accessible from the south, and Trento from the north.

Read about Verona and Mantua

There is a direct road to Verona. It is not high-speed, but if you go not at the most popular times, you can do without traffic jams. To speed up, it is better to turn right after the Autobahn onto the expressway (Tangenziale in Italian, blue route on the map). On this road (just before the Autobahn, if you go from the lake) there is also a large shopping center. During peak hours, it is better to take the Autobahn over this route.

1, 2. Old Sirmione and Sirmione Colombare. The second is a sleeping-tourist suburb and deserves a separate figure because it contains most of the hotels and appartments. The old town is 3 km away, this is not within walking distance! (that is, you will get there, but you will die for excursions). In old Sirmione, the castle and ruins Grottes of Catullus.

3. Peschiera – the old town is inside a fortified fort.

12. Tremosine – observation deck over the lake.

13. Gardone Riviera – Heller’s garden and villa with park of the famous Italian poet.

17. Padenghe – ruins of the fortress.

All posts about lake Garda – #Garda