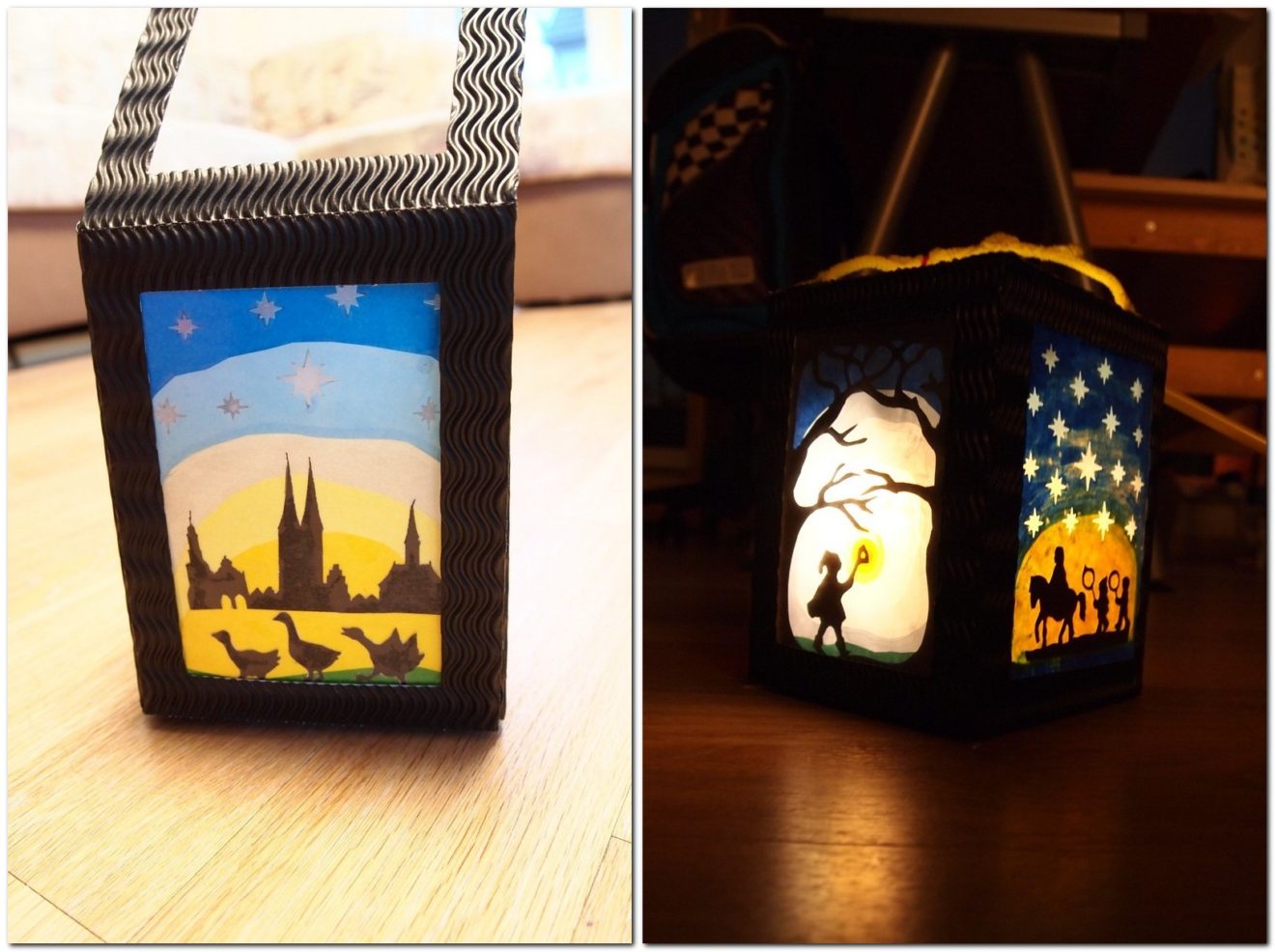 I really like the way the burgundy leaves glow. I tried several times to combine them with lanterns. The problem is that the lantern should look good in daylight and glow well in the dark. One of two things often suffers.

This is a hard-won ideal option. And now the intermediate “failures”.

Geese in the leaves. Errors: the leaves are not covered by anything – they crumbled, the sides are too narrow.

But this is a great lampshade right after the move to new apartment.

Option 3, almost perfect. To get rid of the problem of breaking and flying leaves, I made one of the samples I saw on the Internet, where the leaves were laid between the layers of paper. Good idea, but the daylight appearance suffers. I had to rub it on top with a wax pencil so that the leaves would come out.
Another error: oiled before gluing – oiled paper does not want to glue under any circumstances.

If most of the previous lanterns can be made by a child with the help of an adult, then this type is for very grown-up children and adults.

Examples of pictures can be seen by Google typing “fensterbild silhouette” or “transparentbild” (one word, not two). Silhouettes for copying – “Silhouette Sankt Martin”

Working time: depends on. If you have a clear picture of what you want in your head, then in 2-3 hours in total you can cope.

transparent paper (some sheets of the same tones – from hell to dark) or colored paper (+ oil),
silhouettes from the Internet or from the head,
sharp small scissors,
a office knife or a scalpel.
Optional base for lantern (sold in many shops or art departments). If there is no base, then it is easy to do on your own (see in the previous parts).
Additionally, self-adhesive film for books (Einbandfolie – sold almost everywhere, including Kaufland).

Find a silhouette, print on thick (preferably) paper, indicating when printing the size of the picture you need for a lantern, cut it out. It turned out to be strange for me that cutting is just a simple and relatively fast part of the job.

Imagine properly what colors are needed for the background and what will lie on what. The task is not entirely trivial, it requires some calculations and training (imagination).

The point is that the layers of paper overlap. In this case, paper of the same color is usually used, which, when overlaped, gives darker shades of the same tone, which creates a special mood for such pictures. But another color must be entered so that when overlaying it does not create unnecessary fields of mixed colors.

How it is implemented in practice.

This means that I cannot put either light blue or light yellow paper on the entire size of the picture: this will give me green either at the top or at the bottom. Therefore, I divide the picture into two parts and try to make the joint as much as possible without overlaps / holes, which I almost succeed in.

Next, I make the lightest yellow color in the largest piece, and on top I put the brighter, but smaller paper. If it were transparent paper, the same color could be used and it would become more dark and intensive. But then the transparent paper should be of suitable colors, and that’s the problem.

Next I calmly put green on yellow, since it does not change color.

Components of the bottom.

Glue it together. Oil it.

Since I do not have a common base paper (however you can use white paper as a base), I use a self-adhesive film for books to collect the picture.

The reverse film sheet fits by size the entire wall of my base for a lantern, and the film on the front side (which is optional) is smaller – the size of the window. It turned out that the protruding reverse film glues my picture to the wall of the lantern and I don’t need additional gluing.

Inside the “window” I put
a large circle of light yellow transparent paper (it can be seen that it did not suit exactly),
on it – the piece of the same paper, but smaller,
on it – a circle of orange paper, in the very center of which a small hole is made – it is like a candle light (yellow paper shines through from below).

You do not need to oil the transparent paper. I also stick it on film lantern.

I got tired of sticking very accurately different shades of pieces of paper, trying to get the exact size, so I decided to make the two remaining sides more simple by painting the paper.

I had bags for coloring with holes-stars, one of them I cut and painted with liquid watercolor

On this we put a three dots in the subject. Every year, new fashionable “stars” appear in the Internet: one year cows are hit, another year – owls. Nowadays, eco and recycling are popular, so you can find lanterns from bottles, tetrapacks and paper plates.